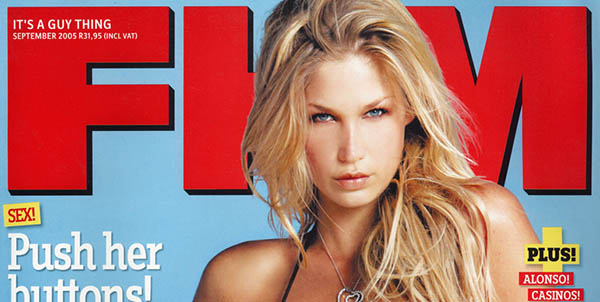 I suppose we all knew the day would come sooner or later. And by “we”, I don’t only mean the public, but also the staff at South Africa’s original and best-loved men’s entertainment magazine. Especially the ones who served long tenures there. Still, getting the call from my homeboy, FHM Editor Louis Raubenheimer, on Monday morning hurt like the emotional equivalent of a stubbed toe.

My friend (and former Editor at FHM) Hagen Engler wrote a really good blog about the mag’s closing, what happened over the last few years and why the decline of the print title has been inevitable for some time. It sums the situation up with accuracy, insight and heart in equal measure. Give it a read.

As for me, I’m just a bit bummed about it. I’ve been writing for FHM for 11 years. I served eight years there as a full-time staffer, experienced the mag and its culture as it grew to the height of its power, and watched as it started to sell that little bit less each month, knowing deep down that this day would inevitably come. As a specialist feature writer, with a decade of regular media-review pages and celeb/babe interviews under my list of monthly duties, I became the most published writer in the local magazine’s history. A tremendous privilege. An even more tremendous jol. I wore a cape, received free Playstation games, partied with Metallica and drove a Mini with boobs through nine provinces in 23 hours and 11 minutes, exactly.

I have a great deal for which to be thankful to FHM. Aside from keeping me fed and clothed for a decade, it was at FHM that I learned my trade, gleaning technical knowledge and being guided by masterful writers and editors the likes of Hagen Engler, Alyn Adams and Stacey Venter. I was taken under wing by mentors like Brendan Cooper who became my family. I travelled the world, grew desensitised to lingerie (in a good way – I can keep eye contact with Tracey McGregor when she’s in a bikini – you try get that right!) and got paid to write about movies, music, beer and whatever kak appealed to my own “very FHM” sense of humour.

Most of all, I made a lifetime’s worth of friends.