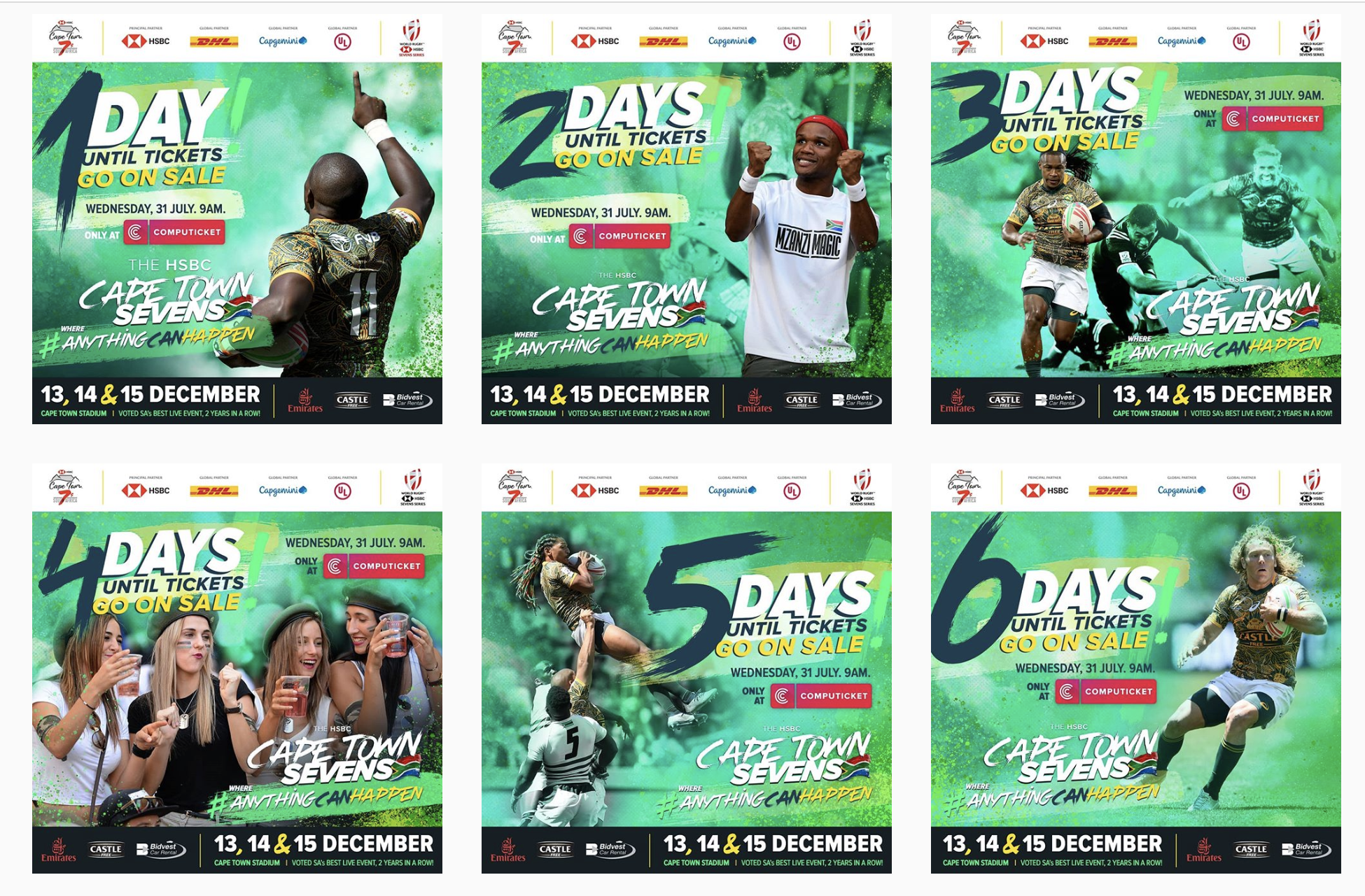 I headed up last year’s 7s campaign for the fifth time in seven* years, and it was bigger, better and more effective than ever!

SARU are an ongoing – and favourite – client of mine. Each year (just about*) I have the honour of heading up the marketing campaign for the HSBC Cape Town Sevens (and previously, the PE Sevens). I’ve also done a number of projects for the Springboks, Baby Boks, Currie Cup and other properties.

This year’s campaign included a host of new challenges. Most notably; the addition of a third event-day on the Friday, the inclusion of Women’s International matches, and the installation of additional seating structures, requiring more aggressive ticket sales, among others.

Working closely with SA Rugby – in particular; SARU Senior Brand and Marketing Manager, Marlon Kruger – and my network of trusted art-direction, videography and audio suppliers, we ran a multi-format, multi-channel, three-month-plus campaign like a small, but very well-oiled machine.

Here’s what Mr. Kruger had to say about the campaign:

“The event voted the Best Live Experience in South Africa 2 years in a row, with 120 000 tickets sold, 28 International Teams and 3 days of high-octane Sevens rugby must have one of the biggest, most successful creative agencies behind it… right? No, it has Gord Laws.

Writing, designing, campaign conceptualisation, acting, directing and even voicing radio ads – Gord Laws has been the one-man force behind all creative for the HSBC Cape Town 7s for a number of years… and we wouldn’t have it any other way. “

To be fair, I do bring on some excellent suppliers/collaborators every year, and SARU are also very hands-on, so it’s not quite a one-man force. But thank you for the kind words, Marlon. It’s always a great pleasure.

Our campaign was largely social media-driven; most notably via Instagram and Facebook. Several times per week, for more than two months, I oversaw the ideation, artwork, messaging and produced the copy to create awareness, push sales, and ensure clear customer information around ticket-sales processes, event details, safety, seating, availability and featured entertainment. To handle the art direction, I brought on board my trusted long-time friend and collaborator; Art Director/Creative Director, Gregory Russell, to create a Key Visual for the campaign, and execute ongoing “fast and loose” artwork requirements.

In short, it was a lot. Like… a lot! This is but a small snippet:

Radio is another major aspect of each year’s campaign, and this year was no different. I wrote, produced (and in many cases, also voiced) more than 20 radio spots for the campaign. These included countdown-timer stings, straight informational retail radio, last-minute ticket-sales pushes, sales pushes for the newly included Friday evening, and some brand-building creative radio with an entertaining twist (including the return of “Lenny” – a fictional brand ambassador who, year after year, can never quite get the Sevens right).

There were also more than twenty live reads for the event, all of which I wrote and, like the radio spots, ensured were with stations on time and in the required formats.

All recording and studio production by the awesome Myles McDonald at Hey!PapaLegend Studios.

Here are just a few examples:

SA Rugby like to be very fluid with the posting of video and photo content. In the build-up to the event, but especially at and just after the event, where photos and new video footage need to be cut and shared on the spot by photographers and videographers.

So, I enlisted animator extraordinary Louis Du Pisani to bring our KV to life as a 10″ video endboard, which SARU could easily stitch onto the end of any video, and thus have it effectively branded with all mandatory sponsors covered, in almost no time at all.

We also created a series of transparent .PNG image frames, to be dropped over images and published in real-time, live from the event.

There were far too many other bits and pieces to include in this article, but suffice it to say we had to create all kinds of weird and wonderful collateral, including large-scale print-work for the stadium itself, print ads, a pull-out booklet for the Cape Argus newspaper, a Managers’ Handbook, and numerous other (often last-minute) elements.

2019 was the fifth year Cape Town has hosted the event, which has been voted SA’s Best Live Event, two-years on the trot. We’ve worked hard in previous years to entrench the event, and the global costume-party culture around it, into Cape Town culture. And it’s worked.

But, with that maturation, comes new challenges. We have to make sure that Capetonians stay interested in what is now no longer a “new” event.

This year’s event-weekend also included an additional evening (the Friday), the first ever Women’s tournament, as well as additional seating structures to increase capacity. We didn’t just need to sell as well as previously. We needed to sell a lot more. And we did. I’m really proud of the response to these events, working with SARU, and the effectiveness we achieve for the budgets at play.

Then there was also the little matter of the 2019 Rugby World Cup, which saw SARU’s Marketing Team head to Japan to manage SA’s cup-winning triumph; right as our campaign was in its busiest and most demanding phase. SA Rugby put a lot of trust in me over this period, which I appreciate and took very seriously. It’s a real honour for me, working with SARU on some of SA’s best loved, national sporting brands.

I’m looking forward to taking things to the next level, once again, for this year’s 2020 campaign.

“*Seven years, you said?! But that doesn’t add up…”
I have – either in my personal capacity or working as a CD or ECD with other agencies – headed up this campaign and others like it for five of the last seven 7s events. But, this also includes two of three PE Sevens events (check out some funny ads we made in 2014), before the tournament was moved to Cape Town in 2015. One, I missed early on when the agency I was freelancing for went it alone. And another more recently, because I had a restraint of trade agreement with the agency to which I had brought the account when I moved there for a year in 2016.